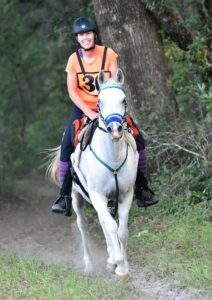 This rider is very experienced in the distance sports. She has been competing for more than two decades. She has over 11,000 AERC miles and over 4000 SEDRA miles. SEDRA miles include numerous Competitive Trail competitions with successful accomplishment of three-day hundreds. She has been in the SEDRA annual senior CTR standings and has also managed her horse to placement in the annual SEDRA Iron Horse standings. AERC/SEDRA sanctioned miles include completion of 14 out of 17 starts in rides of 100 miles. She has numerous top ten completions and several best condition awards.

She has competed on several horses over the years, most for several seasons with good success. Her handling of horses is very professional and respectful. Her current partners are both missing an eye and both are doing well under her management and guidance.

In summary, this rider gets it done without undue fuss or stress for her equine partners. She is respectful of others on the trail and in camp and is a good role model for those desiring to participate in the distance riding sports. 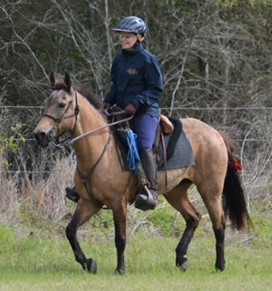 … is a 26 year old Paso Fino mare. She has an impressive distance record. Over her 17 years of continuous competition (2004-2020) she started 154 rides and completed 151 (98% completion rate). Included were 1560 miles in endurance and 3100 miles in limited distance. She is a SEDRA Longevity Horse, SEDRA Partnership Longevity Horse and one-half of the 2013-2014 SEDRA Hall of Fame Horse and Rider Team. One year (2017-2018) she was the actively competing horse with the highest mileage in SEDRA (4655). Her current SEDRA mileage is 4730 miles, making her the highest mileage Paso Fino ever in SEDRA.

In AERC, as of November 2021, Pocita was sixth in the nation in limited distance and first in the AERC SE Region. She has been in the annual AERC SE Region limited distance standings 5 times including one first place. She is one-half of an AERC Decade Team and has been awarded her 15 year AERC Longevity pin. She is also an AERC 3000 Mile Limited Distance Horse. She is the first and the only Paso Fino to accrue 3000 AERC limited distance miles. In June 2012 Pocita was given the honor of being on the cover of AERC’s official magazine, Endurance News.

In her breed association, PFHA, Pocita has accrued more points than any horse in the Recreational Rider division and more than most, if not all, horses in the Show division (4037). She holds the PFHA Title of Proficiency, Legion of Merit and Supreme Merit Awards. She has been PFHA Endurance Horse of the Year three times and PFHA Pleasure Long Distance Horse once. Of note, her son Zen has been PFHA Endurance Horse of the Year once, PFHA Competitive Trail Horse of the Year once and holds his PFHA Title of Proficiency Award. He has also been in the AERC SE Region Limited Distance standings once. So Pocita definitely passed her distance ability on.

As a fine example of a competitive, get it done, no nonsense horse, Pocita has partnered with newbie horses on rides to get them to successful completions. She has led through deep ponds and rivers, sucking black muck, across narrow wobbly bridges and along busy roads. She has never faltered and has never thrown her rider once, not ever.

In summary, Pocita has not only been exemplary in showcasing the Paso Fino breed and gaited horses in general as a legitimate distance competitor, she has also evidenced amazing dependability with an unparalleled can do attitude and all this with minimal management. She is truly one of a kind. 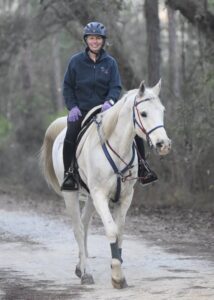 This person has served four terms as AERC President and has served on and chaired several AERC committees. She is currently AERC Secretary, MW Region Director as well as MW Sanctioning Director, serves on the International Committee as MW Region Representative and is on the Ride Manager Committee. She also chairs both the National Championship and Sanctioning Committees.

For over two decades this person has been ride manager for a SEDRA/AERC sanctioned pioneer (now a two day) Florida ride and has assisted at numerous other SEDRA/AERC rides in both the SE and MW regions. Her ride always runs very smoothly and, at least for the riders, is one of the lowest stress most enjoyable rides in the SE.

Mentoring young riders has been a special focus for this person. Several years ago she began using her two day ride to benefit young riders in the US and other countries. She initiated and still sees to fruition youth riders from the US being hosted in a foreign county to participate in an endurance ride there. And makes sure the US riders reciprocate by hosting some of that same country’s young riders at her Florida ride. This person spearheads fundraising and organizing the youth rider exchange. She accompanies the US riders to each host country to make sure all goes well.

This person embodies exemplary service to the distance sports. 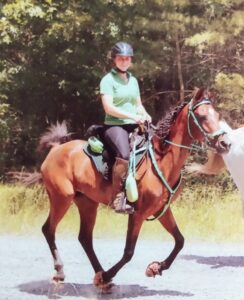 This team has over 2000 miles together, including one 100 mile ride. They are just one season away from their AERC Decade Team Award. They have numerous top ten completions in both limited distance and in endurance. The team has started 53 rides (4 of them 100s) and have completed 44 (83% completion rate).

It is not just statistics, however, that have made this a team worth noting. The equine has had two medical challenges. One is rear end ataxia which can affect his balance. He has had issues with this since he was a foal due to probable injury. He has undergone work up requested by his owner with no specific cause identified. He was also diagnosed with Cushings in 2019. The human partner has never let either condition threaten their partnership. She has managed his care and adjusted her riding skills and competition schedule to ensure her guy stays healthy and that they remain as safe as possible on the trail. And he has responded by continuing to successfully compete, trusting his longtime owner to take excellent care of him.

Because of their confidence in each other this team has been able to remain happily functional and able enjoy the benefits of their sport. They are the epitome of what it means to be a team.